Goal of the pilot phase of the project

The aim of this pilot was to test an augmented system that enables accelerated plant growth. Tests were carried out in collaboration with the Hanze University of Applied Sciences (HUAS) and the Alfred Wegner Institute (AWI).

In its pilot phase, the company Synr3 aimed to develop a saltwater aquaponics installation to grow Sugar kelp in Groningen. Sugar kelp is high in protein and could be a good alternative food and feed source. In addition to this, Sugar kelp is difficult to grow in tanks making it a useful plant to test the potential of an aquaponics system.

Read more about the outcome first phase and the goal for phase 2 on: www.ai4mkb.org/news

Outcome first phase of the project

This first phase of the project has now ended, with the most significant outcome being that the Sugar kelp has successfully grown in both test setups.

Together, all these outcomes have shown that the further development of this system could have an important impact on sustainable food production.

Goal of Phase 2 of the project

Focussing on technical prototype and automation

With the first phase behind them, the Smart Marine Aquaponics Team is going to focus on the development of the technical prototype and automation. With Synr3 and the HUAS working together on improving the aquaponics system with the focus on monitoring and automating the system. AWI is focussing on further researching the most efficient/effective application of this system. 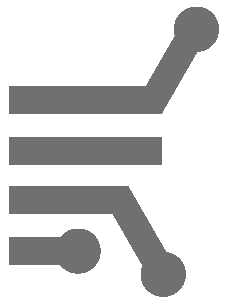